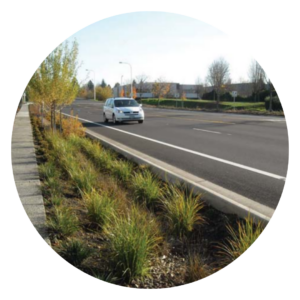 The issues associated with traditional design are caused or exacerbated by the amount of impervious surface in a developed area. Streets and parking lots, which often account for 30-50% of a city’s total land area, have traditionally been constructed with impervious material. This high percentage of impervious surface has contributed to increased runoff and pollutants from vehicles and other urban sources. The problem is exacerbated when increased stormwater runoff reaches a creek channel that is not capable of handling increased flows without significant erosion and degradation. Three of the most significant impacts attributed to traditional design are erosion and flooding and pollution.

Click here to view and download the Green Streets Chapter of the Transportation Agency of Monterey County’s Complete Streets Guidebook.